Art that Defined America: From the Revolution to the 20th Century 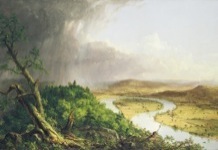 ArtScapades presents Art that Defines America which covers art from the founding of America to the early decades of the 20th Century.  Lectures below can be used in a series, individually, or customized to fit your needs.

American Conflicts:  From the Revolution to the Civil War

Artists Abroad:  From American to Expatriate

American Vistas: From the Hudson River to Uncharted Territories

American Images: From Camera to Canvas

The Ashcan School: From Beautiful to Gritty

American Regionalism: From the Heartland to All of America

Each ArtScapades lecture begins with a  brief overview of the seven elements of art that artists use when composing a piece of art – Color, Line, Texture, Value, Shape, Form, and Space.  Each element is illustrated using a representative work of art.

In each lecture, ArtScapades places the artists in context with an abbreviated timeline of art history.

In Colonial Portraiture, ArtScapades gives the background of the development of portraiture in America, including information on artists in the military, the rise of the middle class and the importance of art to document history.

In American Conflicts, ArtScapades discusses the importance of art during the Revolutionary and Civil Wars. The focus will be on the major artists who commemorated the conflicts, working either on the battlefield or back in their studios.

In Artists Abroad, ArtScapades looks at American artists who, despite their expatriate status, are among America’s greatest talents.

In American Vistas and American Images, ArtScapades focuses on the Hudson River School painters, and explains the changes in art brought about by national pride, the westward expansion, and the growth of travel.

In American Regionalism, ArtScapades details how artists from the midwest included realism in their works, how FDR’s New Deal affected the art world, and how the movement which had its’ roots in the heartland, affected the entire country.

Approximately fifteen works per artist are discussed including iconic works plus those that illustrate significant trends and events in their lives and careers.

In American Images, ArtScapades looks at the art of Albert Bierstadt, Thomas Eakins, and Winslow Homer.

ArtScapades lectures are presented from our laptop, using  your venue’s projection system.